The Pros and Cons of being a Miami Production Company

Miami should be the city that never sleeps; simply put – we drink too much Cuban coffee during the day. As a top vacation destination and the backdrop for countless movies, tv shows and music videos, what is it like to actually live and produce in Miami?

Accord Productions has called South Florida and Miami home for 30 years, and even before then, as founding brothers, Max and Rocky Wyler, were both born and raised here so they knew the lay of the land before there was any.

We decided to do an office poll and created: The top pros and cons of being a Miami based production company.

You know what’s amazing? Not having to shoot in –10-degree weather. Now don’t get us wrong, we have shot in all kinds of atmospheres as our work takes us all over. And in those instances, we are the guys shivering layering light sweaters as we don’t own a real jacket. BUT to be able to do local shoots under sunny skies, on South Beach? Faah-get-about-it.

There’s a reason people want to shoot here. The city, the scenery- South Florida has an energy and look all its own. Let’s be real- no one would’ve tuned in to Nebraska Vice. You want a high energy setting that manages to be both tropical and metropolitan. Lively restaurants, insane bars, the turquoise water. All of these areas make for amazing scenes that you want featured in your films.

One of the most important things about a city is the ease of which you can get out of it. Miami is a major city with access to a lot of different areas by plane, boat, car (we’ve been told it doesn’t matter where you’re, It’s How You Get You There.) We fly easily out of MIA, gear in tow, to anywhere in the world. South American shoots are particularly painless (currently booking flights to upcoming shoots in Costa Rica, Panama and Guatemala.)

Remember when we waxed poetic about Miami weather? Ignore all of it if we are in the months of August or September. In which case our warm, breezy island paradise turns into an inescapable sauna from hell. We sweat so much we look like we just got out of the shower.

But we’ve been here for over 30 years- we’re seasoned, tanned pros! Our crew knows how to stay on track in the heat, to anticipate and deal with the sporadic summer monsoons, and how to manage not to be eaten alive by mosquitos. 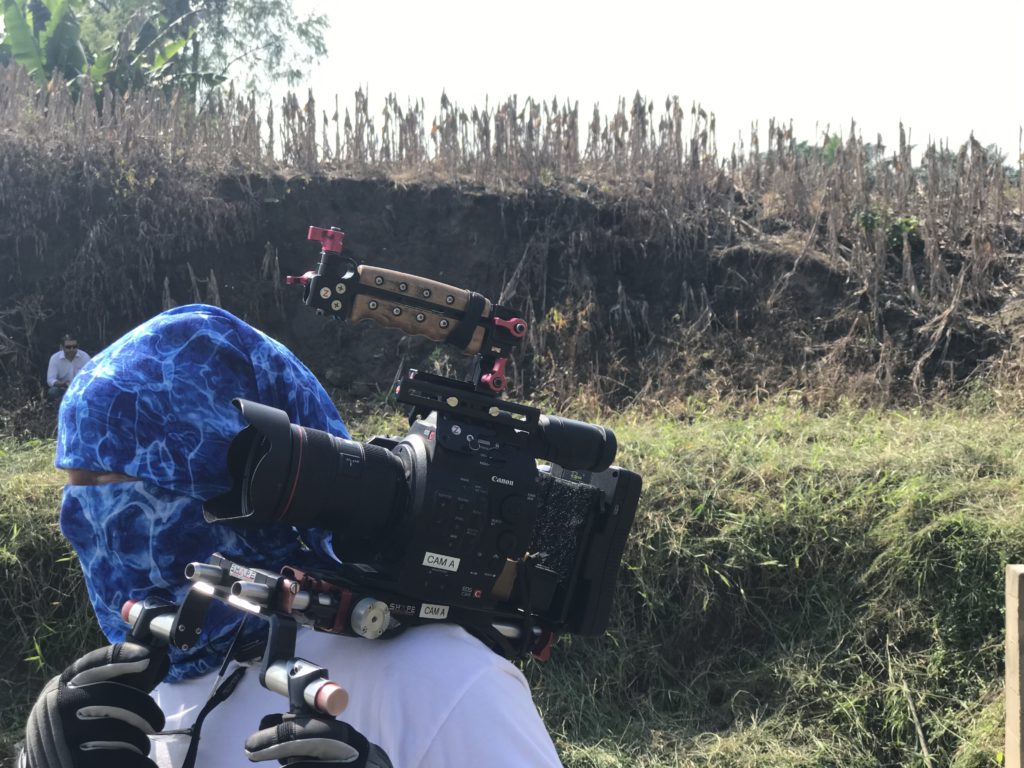 Our DP, Rocky Wyler, knows how to protect himself against the bright Miami summer sun.

Miamians love cars. Which means we are all driving. Usually at the same time. I-95, US-1, the Florida Turnpike- these roads can take us all around the country or they can lock us into a traffic nightmare. But being centrally located- we know how to navigate (driving pun) the obstacle. We set earlier crew call times to budget for inevitable vehicle gridlock. We also know all the shortcuts- but those we WON’T be sharing.

Miami is hardly a small pond. We’re more a medium bay. But we aren’t ocean-sized so there isn’t always as much work. However, we are one of the biggest fish in our neck of the woods so we stay plenty busy. And it doesn’t matter how big or small the client is- we always deliver big fish productions (which turns out, is a pretty awesome company name.)

All cons aside- we love what we do and where we do it. If you’re looking to hire the best production company in South Florida, hire Accord Productions.